Fencing is the sport of sword fighting, and there are many different styles of sword fighting. These are largely based on origin and culture, so swords and techniques developed in Western Europe are different from those developed in the East, Middle East, or even other parts of Asia.  Olympic fencing is a modern interpretation of sword fighting and is loosely based on techniques trained in Western Europe. Fencing is one of the original sports practiced in the modern Olympics, so it has a long history of international competition and cooperation.

Olympic fencing has always been a combination of art and sport.  It is an experiential sport meaning techniques can be taught, but they are not truly learned until they are experienced.  The more you fence, the quicker you will learn and grow as a fencer. BHFC offers beginners classes to get people started in the sport, and we continue to teach everyone through regular practices, competitions, and external training.  Everyone is welcome to come visit the club at any of our regular practices to learn more and visit with our coaches about the sport, our classes, and anything else related to fencing and swords. 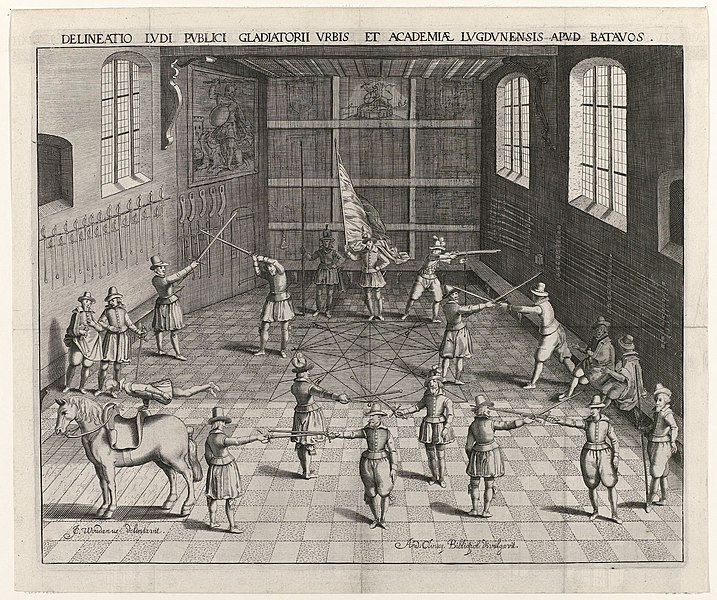 While the sport of fencing is steeped in history and tradition, the modern sport is frequently compared to a glorified game of tag:  touch your opponent before they touch you.  There are rules defined that complicate this a little bit, but the general goal in this sport (as in a real sword fight) is to hit your opponent without getting hit yourself.  Rules of "right-of-way" put a premium on defense, and they add a level of strategy that makes fencing truly unique.  Right-of-way states that only the first attacker will be awarded a touch, and the opponent is obliged to defend themselves before they can score.  Therefore, a fencer needs to understand whether they are attacking or defending and use that to their advantage: how do I get my opponent to do what I want them to do?  The sport is sometimes compared to chess due to the tactics involved--forcing your opponent into a position where they react the way you want them to.  However, there is a huge physical aspect as well because we are moving on a strip as fast as we can and making decisions instantaneously, hence "physical chess."  The physical movements are quick and fast and require speed, quickness, and strength, but then we are placing the tip of a weapon on a relatively small target, so we are also moving part of our body as precisely as a violin player or pianist simultaneously. 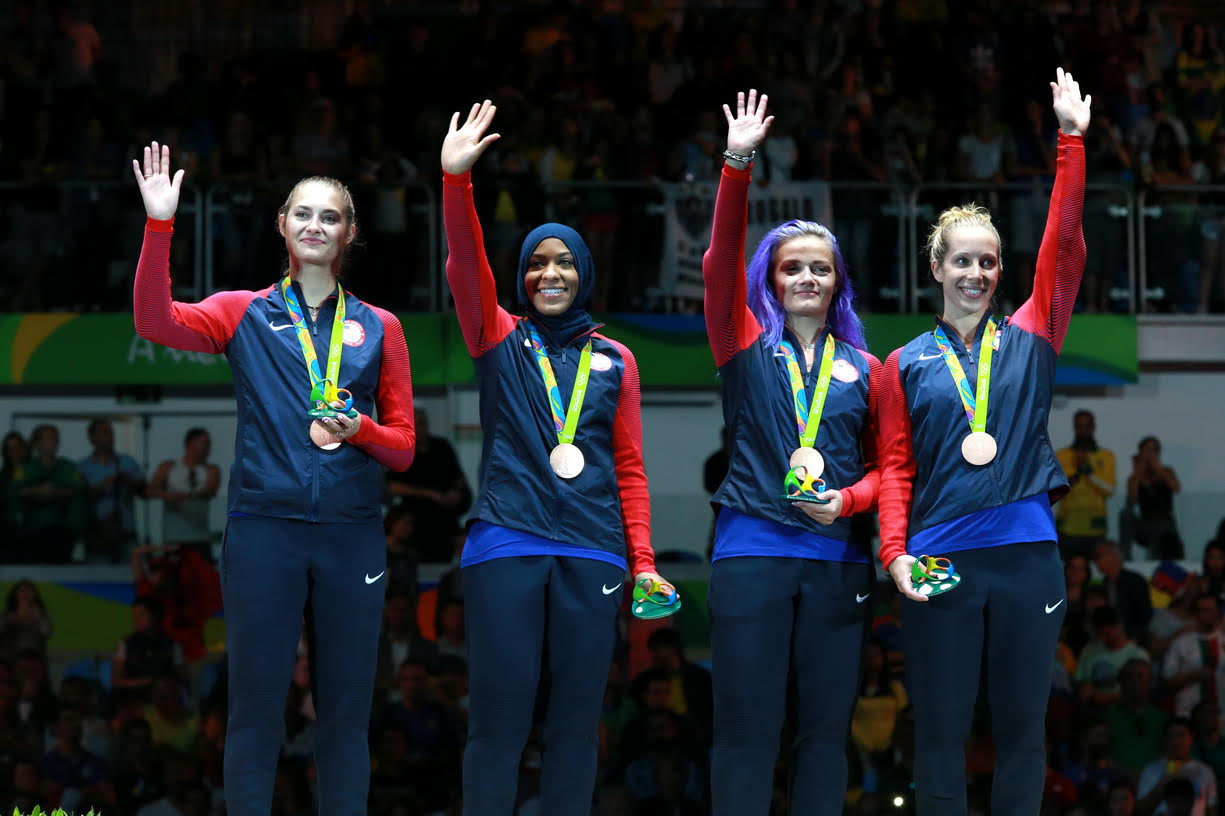 Competing at the Olympics in fencing is the pinnacle of our sport; however, it takes a lot of dedication and effort to get to that stage.  Over the past 5 to 10 years, the US Fencing team has achieved some incredible results at the international level, including at the Olympics, and the sport of fencing is growing because of this.  BHFC coaches build a strong foundation in the sport of fencing, so the goals of each fencer are limited only by their desire and effort.  Even if you do not compete in the Olympics, there are plenty of opportunities to compete and improve your fencing skills.  Local and regional tournaments offer everyone, from recreational fencers to highly dedicated fencers, the chance to compete against other fencers to learn and improve.  Just like many martial sports, fencing is a life-long journey, and you will continue to learn and improve regardless of your level of ability, age, or dedication. 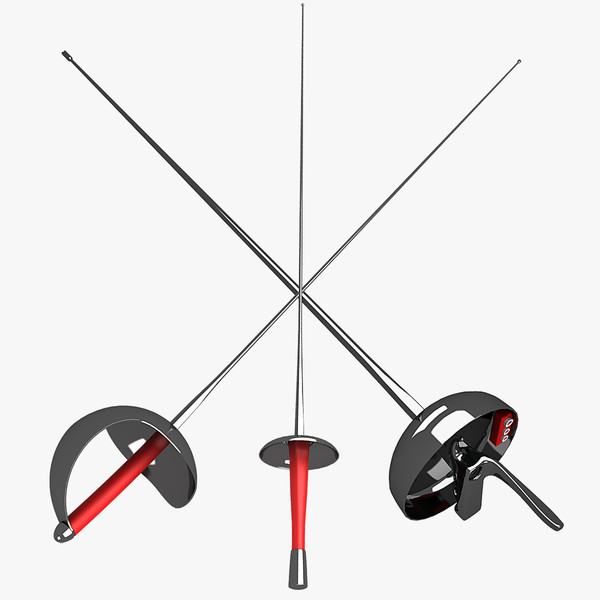 Three different weapons are used in Olympic-style fencing: foil, epee, and saber.  Each weapon offers its own set of skills, techniques, and challenges.  Fencers are encouraged to try all three weapons early in their career, so that they can decide which weapon is best for them.  Most top-level fencers compete in only one weapon; however, many recreational fencers will attend competitions for any and/or all weapons.  To be the best in the world, you need to specialize, but if you are in it for fun, then you might as well learn all three weapons.  BHFC teaches foil in all beginners classes, but the other weapons are taught as well.

Foil is the lightest of the weapons, and it has the smallest target area.  It is frequently chosen as the first weapon for training, since you can learn all of the skills necessary to get started.  However, it is not necessary to start with foil--it just frequently happens that way.  The target area is only the torso, and the rules of right-of-way apply.  Foil is a thrusting weapon, which means you can only score a touch if you hit with the tip of the blade.  Cutting and slashing actions do not count for scoring touches--although they are frequently used for defense.

Epee is the heaviest of the weapons, and it has the largest target area--the entire body (except the back of the head, which is unprotected).  It is also a thrusting weapon, meaning you can only score with the tip of the blade; however, epee does not use the rules of right-of-way, so the tactics and techniques are slightly different.  Since there is not right-of-way, then the fencer that touches first scores the point, and if both fencers touch their opponent at the same time, then both fencers are awarded a touch--called a double touch.

Saber is the same weight as foil and also follows the rules of right-of-way; however, it is a cutting weapon, so while you can score a touch with the tip of the blade, they are most frequently scored by using the edge of the blade instead.  It is fast, aggressive, and exciting, and it has a target area halfway between the other two--everything from the waist up, including the arms and head (technically the back of the head is not target since it is unprotected).

Questions always arise about the safety of fencing--rightfully so.  Thankfully, the answer is simple: fencing is extremely safe, and the governing bodies of the sport work hard to make it so.  BHFC follows all safety guidelines closely, and we work hard to make sure everyone stays safe before, during, and after practices.  Fencing equipment is designed specifically for safety; the masks, jackets, gloves, and knickers are specifically made for the sport, and their design works to keep the fencer from getting seriously injured--even when weapons break.  There have been some interesting studies done, and Fencing.net reported one in particular (https://fencingnet.wpengine.com/13020/fencing-safer-than-badminton/) that shows that fencing is safer than badminton!

While nobody can guarantee complete safety, our sport follows many other sports with the types and severity of injuries reported.  Bruises, twisted ankles, sprained knees, and tennis elbow are the most common types of injury in our sport.

Other Types of Fencing

A common misconception is that Olympic fencing is the only modern sword-fighting.  This is not true at all.  There are many other types of sword fighting that are practiced throughout the world, and each of these have their own histories and traditions.  Visit https://en.wikipedia.org/wiki/Swordsmanship for a sampling of some other sword-fighting disciplines.  Many of these have modern equivalents including kendo, HEMA (Historical European Martial Arts), SCA (Society for Creative Anachronism), kalis, and many others.  In addition, there are many clubs that practice classical fencing techniques, meaning they still use foils, epees, and sabers, but they are judged on technique and skill equally to touches.